Posted on by Nova Barlow 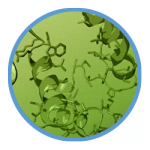 Foldit’s role in Ebola is clearly becoming more important than ever. The Seattle Times took a look yesterday evening at the statewide efforts being made to combat Ebola. Taking a look at nonprofit organizations, grants, and nurses mobilizing towards this epidemic, Foldit and the Baker Laboratory are called out for their contributions and efforts towards finding cures. “Especially for Ebola we put everything out there [through Foldit] because we want things to move quickly,” explains [Baker Lab scientist] La, who hopes these efforts will result in a cheap, easily replicable treatment for Ebola “sooner rather than later.”

Follow the puzzle progress or lend a hand towards the effort here.