On Friday, May 15, the Center for Game Science hosted yet another legendary soirée for members of CSE. Known for the sheer grandness of scale in years past, expectations were high for this year and we are pleased to report the elegance did not disappoint. 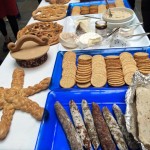 Many department attendees traded in every day attire for something a bit fancier and milled after hours in the CSE Atrium to live music, enjoying a number of snacks and art on display. 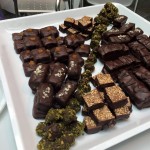 The sweet tooth party goer also would not leave disappointed, with an array of seven petit-fours, one delicious looking stollen, eight quickbreads, six varieties of baked goods, six tart types, four cakes, and a staggering forty-four confections. A half dozen artfully mixed beverages were available to attendees over 21. View the full menu courtesy of CSE News.

For those eyeing the task of organizing for next year, we are pleased to mention that a large number of people pitched in to make all these delicious treats possible, and we also want to thank them for those efforts. 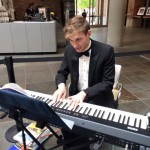 A partial list of contributors to this affair to remember:

Our graduating master event planner Yun-En Liu also provided this parting advice to future planners, “My main advice is to figure out what people want to do, then point everyone in the same direction and fire. Bonus points if you know people who are willing to organize things to reduce the mental load on yourself – the planning can consume a lot of resources if you’re not careful.”

Happy graduation to the upcoming graduates of CSE, and we hope everyone in attendance at this little casual party had a great time. You can see an assortment of the party pictures in the Center for Game Science-TGIF album on Facebook, with more being added as we receive them.